my parents are Mexican who are not

to be confused with Mexican-Americans

or Chicanos. i am a Chicano from Chicago

which means i am a Mexican-American

with a fancy college degree & a few tattoos.

my parents are Mexican who are not

to be confused with Mexicans still living

in México. those Mexicans call themselves

was white in México & my dad was mestizo

& after they crossed the border they became

but my parents call themselves Mexicanos,

who, again, should not be confused for Mexicanos

my family gringos, which is the word my family calls

colleges say put them on a brochure.

i point out that all the men in my family

in me. which means it’s the fancy college degrees

in me, which is also diverse of me. everything in me

is diverse even when i eat American foods

when a white person eats them & diverse

when my family eats them. so much of America

undocumented when they came to this country

& by undocumented, i mean sin papeles, &

by sin papeles, i mean royally fucked which

should not be confused with the American Dream

though the two are cousins. colleges are not

looking for undocumented diversity. my dad

became a citizen which should not be confused

with keys to the house. we were safe from

deportation, which should not be confused

with walking the plank. though they’re cousins.

i call that sociology, but that’s just the Chicano

in me who should not be confused with the diversity

in me or the Mexicano in me who is constantly fighting

with the upwardly mobile in me who is good friends

with the Mexican-American in me who the colleges

love, but only on brochures, who the government calls

my parents call mijo even when i don’t come home so much. 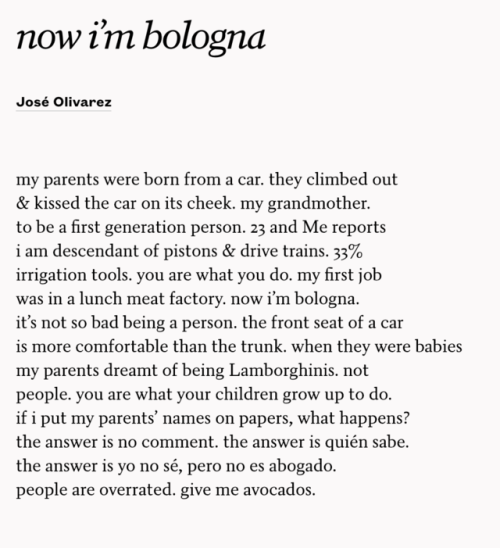