WHEREAS a string-bean blue-eyed man leans back into a swig of beer work-weary lips at the dark bottle keeping cool in short sleeves and khakis he enters the discussion;

Whereas his wrist loose at the bottleneck to come across as candid “Well at least there was an Apology that’s all I can say” he offers to the circle each of them scholarly;

Whereas under starlight the fireflies wink across East Coast grass and me I sit there painful in my silence glued to a bench in the midst of the American casual;

Whereas a subtle electricity in that low purple light I felt their eyes on my face gauging a reaction and someone’s discomfort leaks out in a well-stated “Hmmm”;

Whereas like a bird darting from an oncoming semi my mind races to the Apology’s assertion “While the establishment of permanent European settlements in North America did stir conflict with nearby Indian tribes, peaceful and mutually beneficial interactions also took place”;

Whereas I cross my arms and raise a curled hand to my mouth as if thinking as if  taking it in I allow a static quiet then choose to stand up excusing myself  I leave them to unease;

Whereas I drive down the road replaying the get-together how the man and his beer bottle stated their piece and I reel at what I could have said or done better;

Whereas I could’ve but didn’t broach the subject of “genocide” the absence of this term from the Apology and its rephrasing as “conflict” for example;

Whereas since the moment had passed I accept what’s done and the knife of my conscience pierces with bone-clean self-honesty;

Whereas in a stirred conflict between settlers and an Indian that night in a circle;

Whereas I struggle to confess that I didn’t want to explain anything;

Whereas truthfully I wished most to kick the legs of that man’s chair out from under him;

Whereas to watch him fall backward legs flailing beer stench across his chest;

Whereas I pictured it happening in cinematic slow-motion delightful;

Whereas the curled hand I raised to my mouth was a sign of indecision;

Whereas I could’ve done it but I didn’t;

Whereas I can admit this also took place, yes, at least;

WHEREAS we ride to the airport in a van they swivel their necks and shoulders around to speak to me sugar and lilt in their voices something like nurses their nursely kindness through my hair then engage me as comrades in a fight together. Well what we want to know one lady asks is why they don’t have schools there? Her outrage empathy her furrowed brow. There are schools there I reply. Grade schools high schools colleges. But why aren’t there any stores there? There are stores there. Grocery stores convenience stores trading posts whatever what-have-you I explain but it’s here I recognize the break. It’s here we roll along the pavement into hills of conversation we share a ride we share a country but live in alternate nations and here I must tell them what they don’t know or, should I? Should I is the moment to seize and before I know it I say Well you know Native people as in tribes as in “people” living over there are people with their own nations each with its own government and flag they rise to their own national songs and sing in their own languages, even. And by there I mean here all around us I remind them. Drifting in side-glances to whirring trees through the van windows then back to me they dig in they unearth the golden question My God how come we were never taught this in our schools? The concern and furrow. But God the slowing wheels and we lurch forward in the van’s downshift and brake. Together we reach a full-stop. Trapped in a helix of traffic we’re late for check-in security flights our shoulders flex forward into panicked outward gazes nerves and fingers cradle our wristwatches so to answer their question now would be untimely because to really speak to it ever is, untimely. But there Comrades there there Nurses. I will remember the swing of your gold earrings. There your perfume around me as a fresh blanket. There you checked my pulse kindly. There the boundary of bedside manners;

WHEREAS a woman I know says she watched a news program a reporter detailed the fire a house in which five children burned perhaps their father too she doesn’t recall exactly but remembers the camera on the mother’s face the mother’s blubbering her hiccuping and wail she leans to me she says she never knew then in those times that year this country the northern state she grew up in she was so young you see she’d never seen it before nobody talked about them she means Indians she tells me and so on and so on but that moment in front of the TV she says was like opening a box left at her door opening to see the thing inside whereas to say she learned through that mother’s face can you believe it and I let her finish wanting someone to say it but she hated saying it or so she said admitting how she never knew until then they could feel;

WHEREAS the word whereas means it being the case that, or considering that, or while on the contrary; is a qualifying or introductory statement, a conjunction, a connector. Whereas sets the table. The cloth. The saltshakers and plates. Whereas calls me to the table because Whereas precedes and invites. I have come now. I’m seated across from a Whereas smile. Under pressure of formalities, I fidget I shake my legs. I’m not one for these smiles, Whereas I have spent my life in unholding. What do you mean by unholding? Whereas asks and since Whereas rarely asks, I am moved to respond, Whereas, I have learned to exist and exist without your formality, saltshakers, plates, cloth. Without the slightest conjunctions to connect me. Without an exchange of questions, without the courtesy of answers. This has become mine, this unholding. Whereas, with or without the setup, I can see the dish being served. Whereas let us bow our heads in prayer now, just enough to eat; 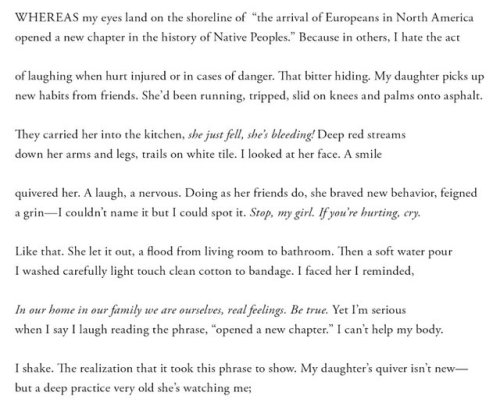