﻿The piers are pummeled by the waves;
In a lonely field the rain
Lashes an abandoned train;
Outlaws fill the mountain caves.

Fantastic grow the evening gowns;
Agents of the Fisc pursue
Absconding tax-defaulters through
The sewers of provincial towns.

Private rites of magic send
The temple prostitutes to sleep;
All the literati keep
An imaginary friend.

Cerebrotonic Cato may
Extol the Ancient Disciplines,
But the muscle-bound Marines
Mutiny for food and pay.

Caesar’s double-bed is warm
As an unimportant clerk
Writes I DO NOT LIKE MY WORK
On a pink official form.

Unendowed with wealth or pity,
Little birds with scarlet legs,
Sitting on their speckled eggs,
Eye each flu-infected city. 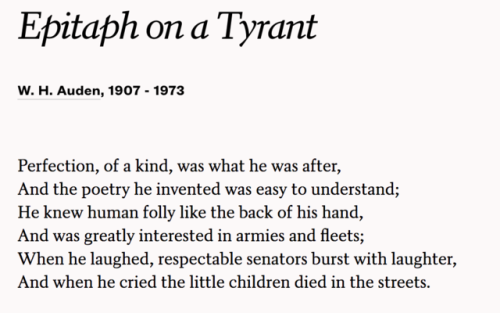 Well, so that is that. Now we must dismantle the tree,

Putting the decorations back into their cardboard boxes –

Some have got broken – and carrying them up to the attic.

The holly and the mistletoe must be taken down and burnt,

And the children got ready for school. There are enough

Left-overs to do, warmed-up, for the rest of the week –

Not that we have much appetite, having drunk such a lot,

Stayed up so late, attempted – quite unsuccessfully –

To love all of our relatives, and in general

Grossly overestimated our powers. Once again

To do more than entertain it as an agreeable

Possibility, once again we have sent Him away,

Begging though to remain His disobedient servant,

The promising child who cannot keep His word for long.

The Christmas Feast is already a fading memory,

And already the mind begins to be vaguely aware

Of an unpleasant whiff of apprehension at the thought

Of Lent and Good Friday which cannot, after all, now

Be very far off. But, for the time being, here we all are,

Back in the moderate Aristotelian city

Of darning and the Eight-Fifteen, where Euclid’s geometry

And the kitchen table exists because I scrub it.

It seems to have shrunk during the holidays. The streets

Are much narrower than we remembered; we had forgotten

The office was as depressing as this. To those who have seen

The Child, however dimly, however incredulously,

The Time Being is, in a sense, the most trying time of all.

For the innocent children who whispered so excitedly

Outside the locked door where they knew the presents to be

Grew up when it opened. Now, recollecting that moment

We can repress the joy, but the guilt remains conscious;

Remembering the stable where for once in our lives

Everything became a You and nothing was an It.

I sit in one of the dives
On Fifty-second Street
Uncertain and afraid
As the clever hopes expire
Of a low dishonest decade:
Waves of anger and fear
Circulate over the bright
And darkened lands of the earth,
Obsessing our private lives;
The unmentionable odour of death
Offends the September night.

Accurate scholarship can
Unearth the whole offence
From Luther until now
That has driven a culture mad,
Find what occurred at Linz,
What huge imago made
A psychopathic god:
I and the public know
What all schoolchildren learn,
Those to whom evil is done
Do evil in return.

Exiled Thucydides knew
All that a speech can say
About Democracy,
And what dictators do,
The elderly rubbish they talk
To an apathetic grave;
Analysed all in his book,
The enlightenment driven away,
The habit-forming pain,
Mismanagement and grief:
We must suffer them all again.

Into this neutral air
Where blind skyscrapers use
Their full height to proclaim
The strength of Collective Man,
Each language pours its vain
Competitive excuse:
But who can live for long
In an euphoric dream;
Out of the mirror they stare,
Imperialism’s face
And the international wrong.

Faces along the bar
Cling to their average day:
The lights must never go out,
The music must always play,
All the conventions conspire
To make this fort assume
The furniture of home;
Lest we should see where we are,
Lost in a haunted wood,
Children afraid of the night
Who have never been happy or good.

The windiest militant trash
Important Persons shout
Is not so crude as our wish:
What mad Nijinsky wrote
About Diaghilev
Is true of the normal heart;
For the error bred in the bone
Of each woman and each man
Craves what it cannot have,
Not universal love
But to be loved alone.

From the conservative dark
Into the ethical life
The dense commuters come,
Repeating their morning vow;
“I will be true to the wife,
I’ll concentrate more on my work,“
And helpless governors wake
To resume their compulsory game:
Who can release them now,
Who can reach the deaf,
Who can speak for the dumb?

All I have is a voice
To undo the folded lie,
The romantic lie in the brain
Of the sensual man-in-the-street
And the lie of Authority
Whose buildings grope the sky:
There is no such thing as the State
And no one exists alone;
Hunger allows no choice
To the citizen or the police;
We must love one another or die.

Defenceless under the night
Our world in stupor lies;
Yet, dotted everywhere,
Ironic points of light
Flash out wherever the Just
Exchange their messages:
May I, composed like them
Of Eros and of dust,
Beleaguered by the same
Negation and despair,
Show an affirming flame.