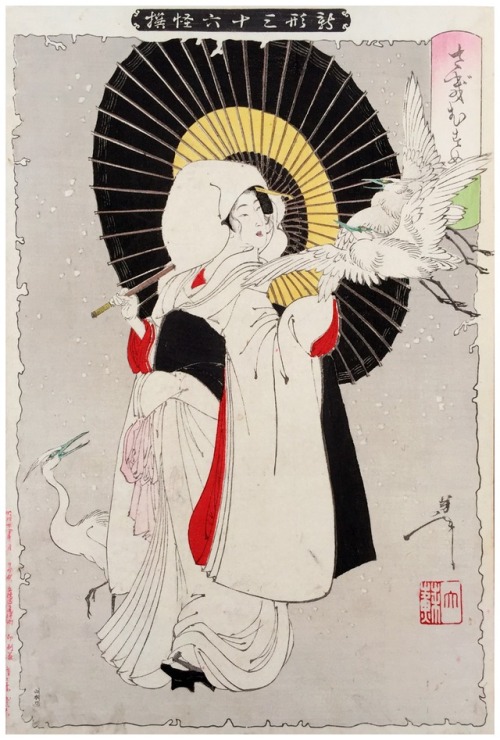 One thing that interests me about Yoshitoshi’s “One Hundred Aspects of the Moon” series is that it depicts legends and texts which project cultural aspects of Japan at the time. This tale is one of my favorites, visually and story-wise. This print illustrates the story of Yokobue from the 13th century Heike Monogatari (tale of Heike). The woman depicted, Yokobue, was an attendant to the empress. She fell in love with a palace guard but his father did not approve the marriage. The guard, torn between his love for Yokobue and his duty to his family, left the capital to become a monk at Horin temple. The ending varies in two ways. In both endings she tried to visit him at the temple, but he feared he would break his vow if he met her again, thus she was told no one by his former name lived there. In one story she leaves and becomes a priestess. In another story, the grief brings her to suicide, by drowning herself in the Oi River.

This story not only interests me for the empathy Im sure we’ve all felt at one point in our lives for either side of the story. But also for the cultural signifiance within the story, as an Anthropology major Im very interested in cultures. With that said, this story reflects the Confucianist grounding of Japan, and other Asian countries, which puts emphasis on societal roles such as emperor/follower, husband/wife, father/son etc. this story would have ended quite differently if it was a European or other Western country of origin.